Published June 27, 2022 · Written by Omair Khan
We all have that one friend in our social circles today who can’t stop bringing up “crypto” in their conversations. At this point, people would rather talk about controversial politics than crypto but there is a reason why the hype for crypto and web3 continues to rise, especially in the United States of America.

According to a recent study published by crypto education platform Crypto Head, the United States is the fastest crypto-embracing country in the world right now. The platform has labeled the United States as a “crypto-ready” nation. The study was based on several key metrics that qualified a crypto-ready nation.

The study measured the following metrics:
-
Crypto Google Searches
-
Number of crypto ATM's
-
Number of people per crypto ATM
-
Favorable legal environments for crypto
The United States ranked first, with a crypto-ready score of 7.13 out of 10. Cyprus ranked second and Singapore third, both scoring under 6.50. 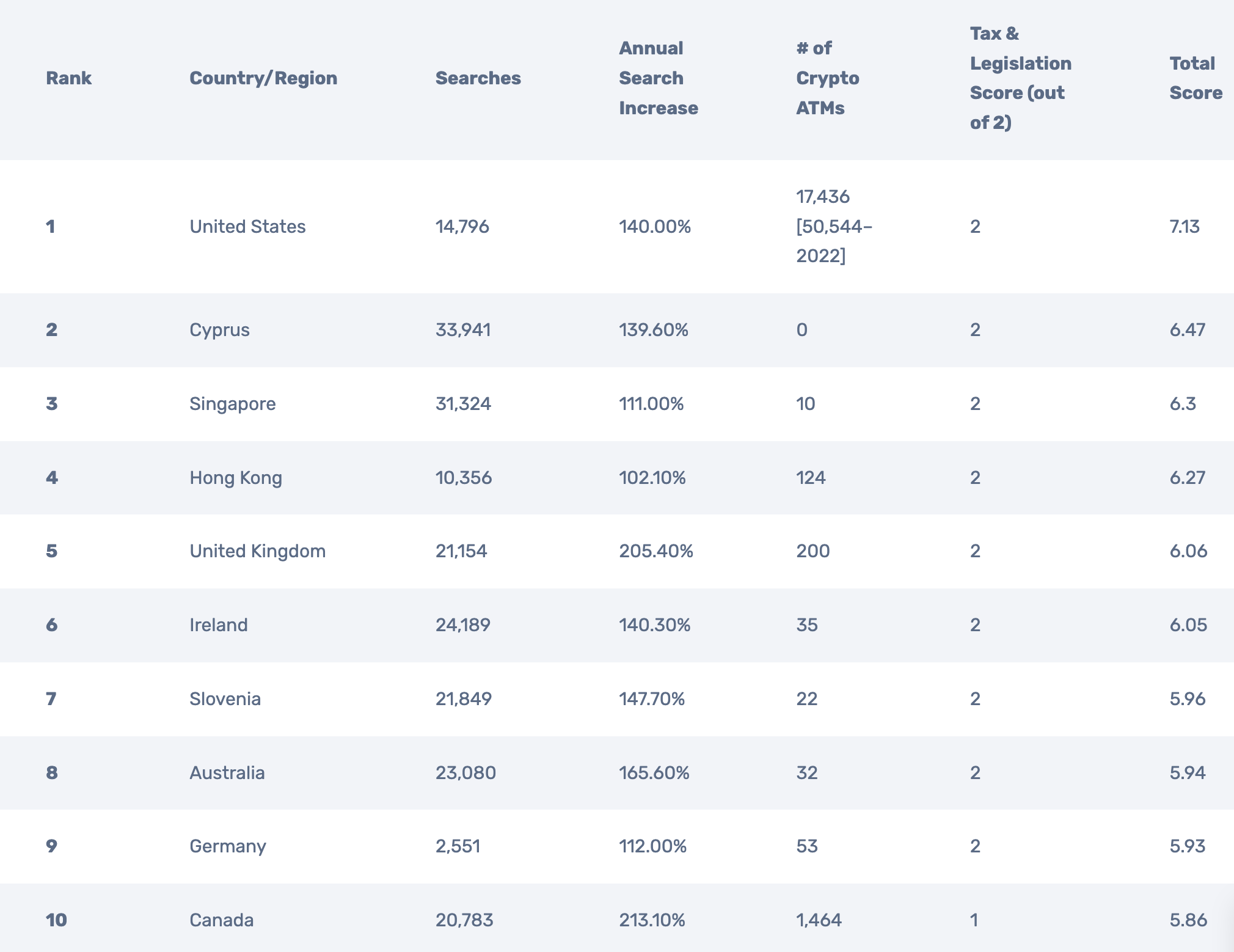 The United States is Leading in the Crypto ATM's Department

According to the data, the United States has 17,436 [now 50,544] crypto ATMs spread across the nation which is double the amount of its competitors. As a matter of fact, almost 90% of the world’s Bitcoin ATMs are in the United States of America.

Furthermore, the number of people per ATM has also increased over time. The U.S leads in this department as well with one crypto ATM for every 19,023 people per capita.

Lastly, Crypto Head placed the United States as one of the top countries to have a favorable legal environment for crypto.

The United States is Leading in the Crypto ATM's Department

Respectively, countries with a more liberal approach to blockchain technology and cryptocurrencies are the crypto-ready leaders of the world. We hope that slowly more countries become aware of this new wave of technology and capitalize on it like the ones that already have. We have seen some positive strides taken by several governments like Nigeria and The Bahamas, for example. These countries have taken the first step into the cryptosphere by creating their own digital currencies in the form of CBDC - Central Bank Digital Currencies - called "eNaira" (for Nigeria) and "The Sand Dollar" (for the Bahamas).
Disclaimer: The information and content manifested on the Black Swan Bitcoin blog are for educational purposes only. Nothing published by Black Swan Bitcoin constitutes as investment recommendation, nor should any data or content published by Black Swan Bitcoin be relied upon  for any investment activities.